A blue variety of the pea

Clitoria ternatea, commonly known as Asian pigeonwings,] bluebellvine, blue pea, butterfly pea, cordofan pea and Darwin pea, is a plant species belonging to the Fabaceae family. The flowers of this vine were imagined to have the shape of human female genitals, hence the Latin name of the genus “Clitoria”, from “clitoris”. (Synonyms: Clitoris principissae.).

This plant is native to tropical equatorial Asia, including locations such as Myanmar, Thailand, Indonesia, Malaysia and the Philippines, but has also been introduced to Africa, Australia and America.

Flower and pods in different states of ripeness

It is a perennial herbaceous plant, with elliptic, obtuse leaves. It grows as a vine or creeper, doing well in moist, neutral soil. The most striking feature about this plant is the color of its flowers, a vivid deep blue; solitary, with light yellow markings. They are about 4 cm (1.6 in) long by 3 cm (1.2 in) wide. Some varieties yield white flowers.

It is grown as an ornamental plant and as a revegetation species (e.g., in coal mines in Australia), requiring little care when cultivated. As a legume, its roots form a symbiotic association with soil bacteria known as rhizobia, which transform atmospheric N2 into a plant-usable form (a process called nitrogen fixing), therefore, this plant is also used to improve soil quality through the decomposition of nitrogen rich plant material. 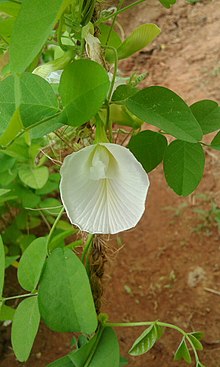 In Southeast Asia, the flower is used as a natural food colouring. Known as bunga telang, in Malay cooking, an aqueous extract is used to colour glutinous rice for kuih ketan (also known as pulut tai tai or pulut tekan in Peranakan/Nyonya cooking) and in nyonya chang. In Kelantan, east part of Malaysia, by adding a few buds of this flower in a pot while cooking white rice will add bluish tint on the rice which is served with other side dishes and such meal is called nasi kerabu. In Burmese and Thai cuisines, the flowers are also dipped in batter and fried.

Butterfly pea flower tea is made from the ternatea flowers and dried lemongrass and changes color depending on what is added to the liquid, with lemon juice turning it purple. In Thailand, a syrupy blue drink known as nam dok anchan (น้ำดอกอัญชัน) is made from the leaves, and it is sometimes consumed with a drop of sweet lime juice to increase acidity and turn the beverage a pink-purple color. In Thailand and Vietnam, this butterfly blue pea flower tea is commonly mixed with honey and lemon for a drink usually served after dinner, or as a refreshment at hotels and spas. The nam dok anchan drink has been described as being a typical local drink like chamomile tea is in other parts of the world.] The tea is found in both hot and cold varieties, where the cold version is often mixed with honey, mint, cinnamon, passion fruit, and ginger.

The flowers have more recently been used a in a color-changing gin. Blue in the bottle, it turns pink when mixed with a carbonated mixer such as tonic water due to the change in pH. One example of this is the Australian product Ink Gin, whose lustrous blue color is generated by an infusion of the flower, changing to blush pink when mixed. As organic colours are not permanent, this type of gin is recommended to be stored in a dark place to maintain the effect.

In traditional Ayurvedic medicine, it is ascribed various qualities including memory enhancing, nootropic, antistress, anxiolytic, antidepressant, anticonvulsant, tranquilizing, and sedative properties.[10] In traditional Chinese medicine, the plant has been ascribed properties affecting female libido due to its similar appearance to the female reproductive organ.

Chemical compounds isolated from C. ternatea include various triterpenoids, flavonol glycosides, anthocyanins and steroids. Cyclic peptides known as cliotides have been isolated from the heat-stable fraction of C. ternateaextract.